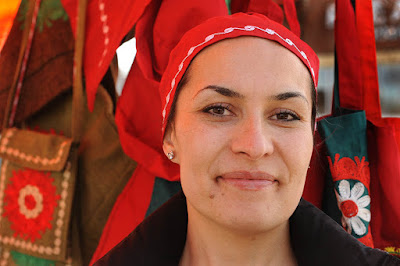 "A lot of people ask me where I am from. I'm originally from Tajikistan. I consider myself Tajik, even though I was born in Germany and lived there several years. Ever since I was seventeen, I have been out of Tajikistan and traveling all over. Most of my time has been in the United States. I also lived in Spain, traveled to Italy, Portugal, to Russia, and to many other countries. But I still consider myself Tajik, and my parents are Tajik as well. The foods my family eats are Tajik, as is our culture.
We lived in different parts of Tajikistan, but mostly in Dushanbe, the capital. Central Asia is in the heart of the Silk Road, so all of the goods and ideas and products and culture from China to Europe have passed through. I was born in East Germany and we traveled back and forth between there and Tajikistan for a few years. After the collapse of Soviet Union, we were transferred back to Tajikistan. I grew up studying mainly in Tajikistan, and then in my senior year, I studied in the United States, in Alabama.
We moved to Arlington in 2014. My husband is doing his PhD studies at George Mason University. While he has been doing that, I was mainly taking care of our two boys. One is four and the other one is eight. My oldest son goes to Patrick Henry Elementary. My youngest will be starting school this year.
I feel accepted here in Arlington. Thank God my husband and I both got our education in the United States. When we came, we spoke the language. We were internet-savvy. But there was a moment when we were literally on the street with four suitcases with no idea where to go. I was literally standing with four suitcases, my child, and my husband.
When we came to Arlington we found an apartment near Columbia Pike. We had been at a temporary Airbnb, and the time had run out. We had to leave. We had a little money allocated to get a taxi. So we went to that building and we told them, “We’re going to give you the deposit, please let us rent this space”. Getting an apartment was not easy because they do a credit check, and again, I was lucky we had a credit history; many immigrants do not. Imagine if we didn't. We would be on the streets. It must be much harder for folks who didn't have the criteria that we had. So, we passed the credit check. We were standing on the street with our suitcases. Everything we owned was in those four suitcases. Thank God it was warm. We told the contractor, we need our apartment right away. The guy said, “but they're cleaning it right now.” I'm like, “no, no, no, I'll clean it myself! Just leave, we have to go inside.” And they were laughing at us. I was insisting “don't worry about it, I will paint it myself!” 'Cause we were exhausted. My oldest was three and a half years old, and I was seven months pregnant. It was a disaster. We had to leave where we had been, and had been searching for a place to live for two weeks, and there was a deadline. That day we had to have the apartment or we would have been sleeping outside on the street. We still remember. It's a bit funny now.
Later on, I decided to start my own business, to become self-employed, because apparently starting your own business is the best thing to do in the United States. So now I am a very busy person. I started in 2015 working from a farmers market. I registered all my licenses, a very difficult process, especially when you work in the food industry. You have to have special certificates and go through different applications and screenings. I didn't realize it was so much work. If you are producing food for consumption, the regulations are very strict. My first vending event was a Christmas bazaar with the Columbia Pike Revitalization Organization.
Now I am out every single Sunday at the farmers market. There are some very harsh days, but other than a severe winter storm, I am there. I have customers who have been buying from me every single Sunday for the past three, four years. We build a relationship. I know them, they know me. I know that they have extended family in Alaska. They buy my products, some of my fruit tarts from the market; and take them to Alaska. Some take things to California. I have people who love this stuff so much they buy it from me, they freeze it, they take it to Colorado, to Florida. Usually it is folks from the neighborhood that come by, especially the Penrose neighborhood, but also from other areas around Columbia Pike near the farmers market. There were some women who were expecting a baby when I just started and now their babies are old enough to buy and eat my products. I know some of the kids from when they were newborn, their mom would come and buy. Now they are three years old and they come and they have their favorite products, they choose them from me at the market. 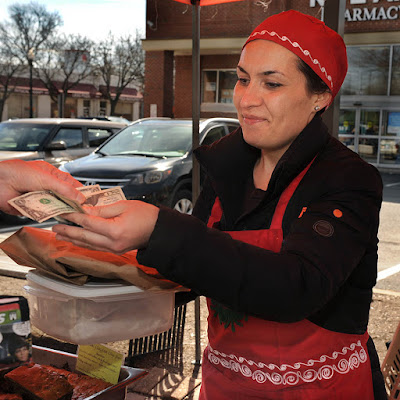 When I started, my business was called Sweets and Spice. I mixed my own spices, I had almost seventy different varieties. And then, when I was home, just with kids, and my husband would be working, I would always bake. This is something I've been doing since childhood. I would always bake and distribute it to neighbors, to friends, and everyone told me, “this tastes so good, you should sell it, you should make a living on it.” My original business idea was to do spices and sweets. It was end of February of 2016 that I already had all of my licenses in place, all of my applications, taxes. Everything was in place and I started selling for my first time at the Columbia Pike Farmers Market. I had a very tiny table with my spices and sweets. That market is year-round, and It was so cold. But the people who would come to the market were so supportive. I think they are the reason I actually stuck to it.  Even if people didn't buy something, they would come just to chat and support me and welcome me. They were like, “oh, you're a new vendor, what you are doing?” Everyone loves talking to each other. So they would encourage me, “hang on, June is coming, the market will grow and you will do much better.” Every single Sunday those people would come just to support me.
During winter season that market has three to four vendors. But when June starts, they're up to twelve vendors and more people come in. I began getting more requests for something more traditional, and that's how I started making savory products. In order to sell different products, you have to have additional licenses. So, I got those licenses as well.
One of the main savory goods is the sambusa, it's like the samosa, but it's a Central Asian variety. All of the foods in my country have more of a Mediterranean flavor. They are not as spicy, and our sambusas are baked instead of being fried. My first flavor was herb and spice, made with my own spices. People just loved it. The first time I ever made it, my sambusas were gone in half an hour. Over the years, I realized that people are trying to stay away from sugar, and they wanted more savory products, something to grab for lunch, for dinner, so I expanded my menu. People would come to me every Sunday on Columbia Pike. My customers would tell me, “we are tired of waiting for you just to show up on Sundays. We want to be able to buy this food during the week. Why don't you open your own store?” In 2017, I changed my company name to Taste of Eurasia and started to look for a storefront. My husband and I went through Arlington, along Columbia Pike. There's not a single business location that I didn't visit, because I wanted to ask them if they could let me either buy their business or let me take over their lease. It was impossible. The rent along Columbia Pike is very high and businesses know that it's a very good place to do business, so they stick to their leases. In the end, we opened our own carryout in Alexandria, in Del Ray. 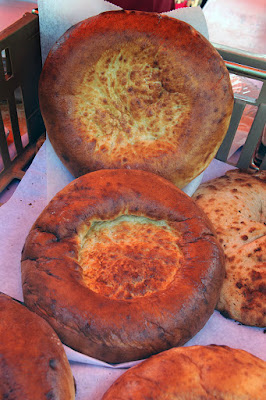 I have been cooking and baking for about two decades. I just had a passion for it, but I never ever thought I would end up doing this for a living. It was my hobby since I was ten or eleven years old. I would try to make something in my mom's kitchen. I would mess up something. But by the time I was thirteen, I could bake cakes. We grew up making everything from scratch, fast food is not very popular, every family cooks for themselves. Breakfast, lunch, dinner. This is something that's part of our nature. We know how to cook because we were raised that, if you want to eat, you have to cook it yourself. Of all of my sisters and my brother, I think I enjoyed cooking and baking the most.
I lived in Montana for almost six years. I got my bachelor's in political science and Spanish. I did my master's degree there as well, in public administration and international development. I say that baking and cooking have always been my hobby, but I never thought about doing business with it. Back home, I never saw myself as a business owner. Here, it seems so much easier. Yes, there are a lot of regulations, so many tasks and check marks, but if you do it, if you get this and that, you can work, you have a way of growing, and that's what happened. When I started, my table was just three feet square. Now I have two tables and during peak seasons, I have seven markets, most of them in Arlington. So I have Columbia Pike, Old Town, Clarendon and sometimes I go to the Courthouse farmers market. I was trying to expand and it worked.
The number one reason I thought this would be successful is because a lot of people, especially in this neighborhood, are very conscious about healthy eating. They are trying to get foods that are all natural, and they want to support local farmers, so that's what I do. We make everything from scratch, we use non-GMO, unbleached products like flour, and we work with local farmers from Maryland, West Virginia, and Virginia to get our produce and eggs. We work with local butchers here on Columbia Pike to source all of our meat products which come from local farms. I know this great halal butcher on Columbia Pike, behind the Irish pub. I meet the farmers through the markets and through some of my customers. It's all through communication with people. I think the number one reason I actually dared to open my own place was the people who were coming and encouraging me 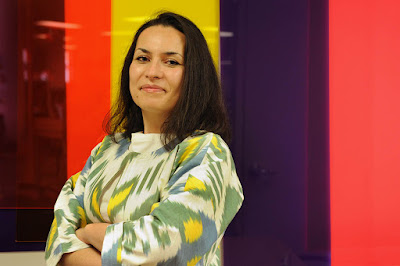 and my husband who supported me all the way. They gave me strength to do this.


The beauty of living in the US is that if you're persistent with something, you can grow. We have recently purchased our own property. My husband is doing his studies, he's working with the World Bank. I'm focusing more on growing the businesses, but also on the charity organization. I want to do something different. I'm still brainstorming, because every time I see something that doesn't feel right, I want to do something about it.