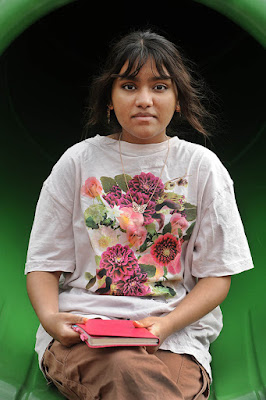 I met Nabela through AHC Inc’s Teen College and Career Readiness program. She is the daughter of Bangladeshi immigrants, so we had a language in common as I am Bengali from India. At the end of the interview, she asked me if I spoke Bangla and I said I did. She said she spoke Bangla too, but it was bad. I told her, in Bangla, she could speak with me as mine was bad too after living in the U.S. for 23 years. She laughed and said, “Aamar shada manusher accent ache,” meaning I speak with a white person’s accent. We laughed, because she did! - Sushmita Mazumdar

Difference in Opportunities
“I have lived on Columbia Pike since 4th grade. For my freshman year of high-school I went to Wakefield but then transferred to Washington-Liberty to get better opportunities. There are more things W-L does, for example, the Virginia Junior Academy Science or VJAS. At Wakefield we didn’t have much support from teachers, no one talked about it or even knew what it was but I did VJAS since 7th grade so I was really good at that. I was the only freshman who did VJAS at Wakefield. In 10th grade, I asked to be transferred. When I moved here, it was so different. There were three teachers sponsoring VJAS and so many posters all over. They had more outreach. My friend Afrin and I just did a project on this problem. It’s a part of the systemic racism and how people of color first get lacking education, because of that, not the best jobs and don’t make much money. Those families then end up living in poorer neighborhoods and their kids grow up there and they get the same lacking education. It’s a never-ending cycle. It was a project for French class and the assignment was to make a news video. We three decided to ask students of color about Systemic Racism. We talked to a Black student, an Asian student, a Hispanic student, a White student and got their input on the issue. It was after I transferred to W-L I noticed all this.
Stories of Childhood
I really liked my childhood on The Pike. I went to Randolph Elementary as I live near there. All the kids from Barcroft Apartments, Quebec Apartments, Westmont Apartments, and Oakland Apartments go there.  We had no busses—we all walked to school. In 5th grade I was in the gifted program, and we did most of our classes on the stairs because it is such a small school and there was no space. But there was a lot of love in the school, and they spent a lot of money on field trips—at least one every month, sometimes two or three. I loved that very much. One field trip we went on was the Outdoor Lab. I remember I didn’t bring a coat and it was so cold. My tent-mate farted, and I peed my pants! And we found someone’s underwear in our tent, and it wasn’t any of ours! It was so chaotic and so funny!
From when I was a baby to age 7, we lived in Alexandria. After that we moved to three different buildings on The Pike. Me and my family we joke about how we moved 7 times in 7 years—for financial reasons perhaps. Me and my sister would talk at night about how small our house was getting and how it was getting more homier, as there was too little space to be independent. The Alexandria house was a bigger house and I only talked to my sister there. But when we moved to The Pike, we also had a baby sister so now there were three of us. Then we moved to a smaller apartment, and we were all devastated but now grateful for it as it brought my entire family and I closer. I remember being sad, though, as I stood in a corner of the empty apartment. It was smaller than our older place and my baby sister was really, really sad. Sometimes when you constantly move around, you don’t feel like you live anywhere and don’t want to get attached to your current living space. 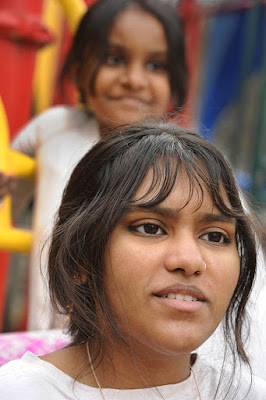 Immigrant Life
My dad said he came here from Bangladesh by winning a lottery. He then brought my mom over a few years later after he built a life here. He was roommates with my friend Afrin’s dad. He and a lot of other immigrants from Bangladesh lived in Westmont Apartments on The Pike. You know the rule how four people can live in a two-bedroom apartment and six people in a three-bedroom apartment, but there were many immigrants illegally living together in a one room apartment.
I am feeling all the emotions again as I tell you this! I felt like I was not appreciative. I guess I was a spoiled kid. When we moved and moved, I didn’t like being poor. Because we were rich when we lived at the Alexandria house but then later, if I wanted something my parents would say you can’t have this and you can’t have that because we were devastatingly poor. However, growing up, I became grateful for the small things, grateful even for showering, because you can really take that for granted when you live a privileged life. All those memories are coming back. I am learning so much about myself now, as I speak. I think I put all these feelings in a box and thew it away somewhere. 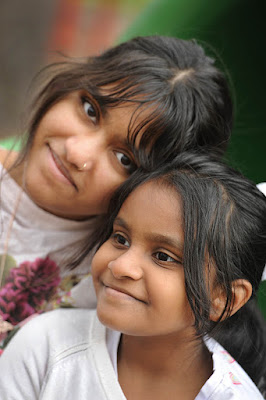 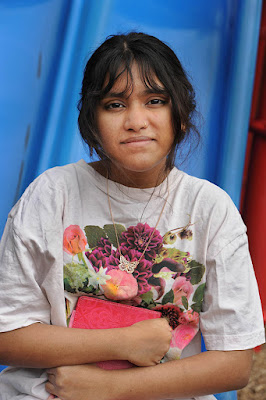 The Road Ahead
I don’t really have any idea of what I want to do after school, but I know I want to work with kids. My mom was a babysitter all my life and she couldn’t do that after I was in 6th grade. I am the middle child of three sisters and am really close with my baby sister. I enjoy being around kids. I don’t really know what I want to do but I want to live life. I don’t want to be disappointed by having too many expectations. I’ll just go with the flow. I don’t have a passion job or anything, but I want an education because that helps you go places. My parents are very much like “Be a Doctor, Be an Engineer!” Sometimes it can be stressful.
When I go to W-L, I stay more in the Ballston area than The Pike. I don’t really like that. The Pike feels more like home, more people look like you there. Here the people give off the vibe of click-click, do this, get this done, quick. The Pike is more calming, like take your time, and it’s so different. The downside is that other students think The Pike is like “ghetto.” One student just told me that he was once lost, his phone was dead, he was scared and telling me he was in danger. I thought he was in another country where he didn’t know anyone or maybe another state. But he was in South Arlington, one mile from his home! I was pissed off that people had that perception on my neighborhood.
I used to hate being Bengali/Bangladeshi. In W-L I’m in social anthropology class and the teacher really emphasizes culture and languages and I started enjoying it because so many of the other students, who are white, don’t have any of that. So, I started to embrace it."

Project Mother Tongue: April 12, 2022
The day of the photo shoot with Lloyd, Nabela told me a friend had dissed her because she didn’t know a second language. I told her I had an idea and asked if she would like to translate a few words or lines from her interview and learn to write it in Bangla. I said I could teach her because I had been re-learning how to write Bangla myself for a project of my own. She was excited and came to my Studio during Spring Break.
The first line she wanted to translate was the funny one. “I have a White person’s accent.” It was why she doesn’t really speak the language, she said. People laugh at her accent.
I tried to write it but when I got stuck on certain letters, I put in into Google Translate and saw the Bengali translation. The words weren’t the same as Nabela’s but we found key spellings and adjusted the sentence to be hers.
Then I showed her how to write those words forming shapes, finding similarities to other shapes she knew. She saw the Bangla letter Cha and found in it a lowercase B and the number 2. She tried it but was nervous saying she would mess it up. That’s when I brought out the sketch book and water-soluble graphite and crayons. When we can make writing our language into a fun art, it becomes different and we can enjoy it.
Then she wrote the word White. In Bangla it is shaada. She added red and green—colors of the flag of Bangladesh. It looked beautiful and was totally readable and high-fived and clapped.  When we stepped back and looked at the word, she said she saw how it looked like the English letters S, M, and T!
Then she wanted to write her name. I typed it, Nabela, into Google Translate and it asked: Did you mean Nabila? I ignored that as she spelled it Nabela. As she wrote it out, I asked her how her parents say her name. “They say it like it has two “e”s,” she said. “Uh oh. That changes the spelling,” I said. “Really?” she was surprised.
I clicked on Google’s suggestion: Nabila. I showed her how the spelling was different. “Yeah, somehow the English spelling of my name got changed and it lost an e,” she shrugged. I asked her what her name meant, and she shrugged. So, we looked it up.
Nabila: a girl's name of Arabic origin meaning "honorable, noble, excellence".
She was overjoyed. She asked me if I knew what Rahman, her last name, meant. I didn’t. “Merciful,” she said. She colored the words in red and green again but in a different way, writing the meaning in English using the black crayon. Rahman: an Arabic origin surname meaning "gracious", "King", "merciful."
After that we looked for another funny bit in her interview. She picked the line where she says how she and her tent-mate found someone’s underwear in their tent in the Outdoor Lab. “My mom says Undie,” Nabela said. She couldn’t make the proper Bangla sentence, but I told her I didn’t care. We were just having fun. What she wrote was We Didn’t Have Undies. She made it colorful, the Bangla letters rolling off the end of her water-soluble crayons easily now. She had let go of her need to be perfect, something many good students—young or old—struggle with. “Our language and script are our heritage,” I told her. “It’s all somewhere inside us whether we use it or not.” “Yeah,” she said. “This is who I am, Bangladeshi, no matter what language I speak or what clothes I wear,” she said. 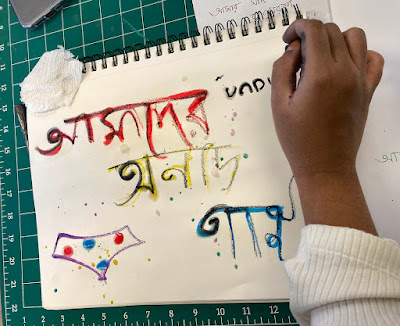 The artworks dried as we talked and shared many stories. It was a wonderful afternoon during Ramadan and I also got to learn some beautiful Arabic words and their meanings. 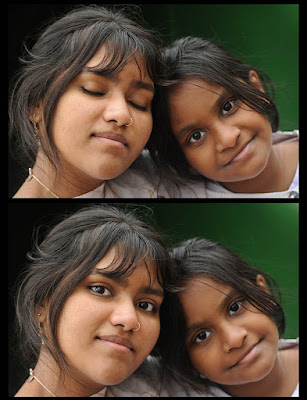