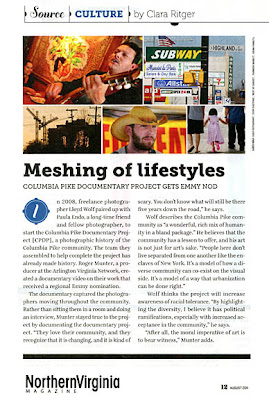 An article on the Columbia Pike Documentary Project, highlighting AVN's Roger Munter's Emmy nomination for his video on our work, is featured in the August issue of Northern Virginia Magazine.

The video, and an extensive slide show of CPDP's photographer's images, can be viewed at the magazine's online site.

Thanks to Clara Ritger for her coverage .
Posted by Lloyd at 11:34 AM